Maybe you’re familiar with the struggle of trying to let go of something.

Maybe it’s fear, maybe it’s resentment, maybe it’s self-doubt. Whatever it is, you’re acutely aware that it’s getting in the way of you making progress and therefore, it’s not welcome.

Maybe you’re in the middle of this struggle right now.

Well, if so, here’s a perspective that I hope may help you let go of your struggle…

Why is it such a struggle to let go?

Let’s use self-doubt as an example. It’s something I know a little about after all! (But you could use any emotion or experience that’s holding you back right now).

We gain awareness and then we attempt to remove this energy from our lives, and this is when the struggle commences.

Maybe we overcome the self-doubt in one circumstance only to wake up the next day and it’s there again. Maybe even bigger, or more draining, more frustrating.

So, then we employ those techniques again in an attempt to cut it out, discard it. This is usually some process of reframing and self-talk, self-reassurance, or even avoidance.

And it doesn’t go anywhere. It get bigger and more frustrating.

It’s quite simple, when we gain awareness of something we start to notice it more.

Perhaps the self-doubt has always been there in the background, but it goes unnoticed until we bring the light of awareness on to it. With self-doubt, this light of awareness generally happens when we’re trying to move towards something. Perhaps we’ve set a new goal we want to achieve, this takes us out of our comfort zone and, ‘oh hello self-doubt, there you are again.’

This is why it seems like self-doubt shows up when we LEAST want it to!

Well self-doubt has actually been there all the time, it’s just been hidden and unnoticed. Now that we want to do something, the self-doubt comes to the surface. And we do that thing of ignoring it, shutting it out, denying it.

“Whatever we fight we strengthen…”

This is one of my favourite quotes by Eckhart Tolle, I’ve used it many times in my writing.

And it sums up what’s happening here.

But here’s a perspective for you.

And it’s obvious when you think about it.

Unless you hold onto it first, you’re not letting go, you’re pushing it away and fighting the experience.

This is what’s truly causing the struggle. Not your inability to let go. Your reluctance to pick it up first.

How to hold it

You might be tempted to pick it up and throw it for six, banish it right out of existence. But that’s not going to work either.

What you need to do is to pick it up gently, with compassionate understanding.

And this is where the magic happens. You see, self-doubt is simply trying to get your attention and there is something precious in that message, if only we can learn to work with it. 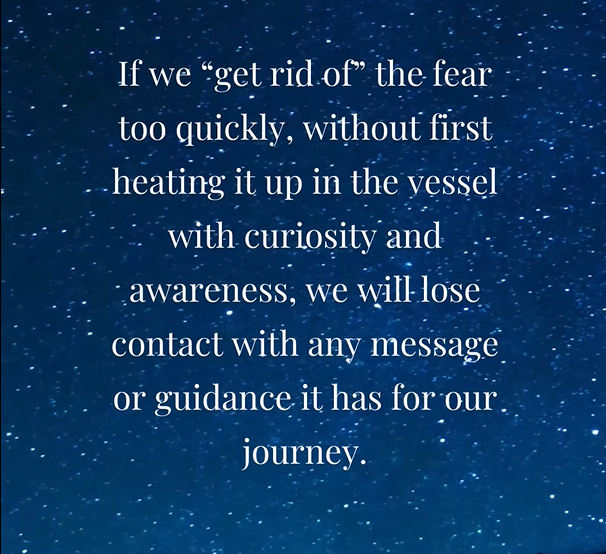 He has written a beautiful book, which is a wonderful accompaniment on this journey with self-doubt.

A Healing Space: Befriending Ourselves in Difficult Times

This is a truly heartwarming book that uses the analogy of alchemy in our healing process. The Healing Space is where each of us becomes the alchemist of our own lives, conducting and artfully tending to an experiment of creative discovery and the unfolding of the soul.

The tradition of alchemy was involved with the conversion of base metals into silver or gold. The healing space uses this analogy as an approach to our inner experience with the principle of mining the intelligence buried within our symptoms, emotions, and most challenging experiences.

This process works by holding the experience and bringing the fire of curiosity and awareness.

The Magic of Self-Doubt

It’s no easy feat to come into a compassionate relationship with self-doubt (or whatever it is that you consider is holding you back). It not only goes against so much conditioned behaviour but our very human nature for seeking safety, security, familiarity, comfort. These responses are so hard-wired into our systems that it can feel like a major engineering project to develop a different approach.

But this can only be done through the approach of compassionate understanding.

The moment we begin to judge ourselves and our experience is the same moment that we close the door and revert to the old conditioned way.

And this is also where the magic lies. Here is an approach that allows us to gently examine our conditioning, the limiting beliefs that have been unconsciously driving us, bring them to the light and more forward.

This is not about mastery

“There is no ‘mastering’ here. Life is not something to master but to stand in awe of and participate in.”

This is another quote taken from Matt Licata and a perspective that I appreciate greatly.

When we adopt this approach, it’s not about overcoming anything, it’s about including everything.

We begin to recognise that these parts of us we judged to be weak or inadequate are actually a source of wisdom, strength, and resilience.

I have written before about Ending the Self-Improvement Project

And I truly believe that applies to each of us, no matter how troubled our existence is feeling right now.

Operating from the core belief of ‘enough’ gives us the capacity to truly stand in awe and participate in life.

Would you like to learn more about this approach?

That’s what I’m focussed upon bringing this community. The inspiration and support to develop an approach of compassionate understanding to self-doubt. So you can learn how to welcome it whenever it arises and mine the wisdom of the experience.

I am currently offering a 5 session coaching package. You can find out more about this on my website: https://oliviadsilva.com/work-with-me/

Or you can sign up for a free-of-charge, no obligation consultation session where we will focus upon welcoming your experience of self-doubt and recognising it as a positive indicator in your life.

Just complete this brief questionnaire and we will arrange the 1hr session via Zoom.

Get ready to mine the wisdom of self-doubt and participate in life!

The Doubters is my fledgling online community.

A space where self-doubt is considered a positive force for meaningful and sustainable growth.

How to Make Peace with Self-Doubt

When Does Self-Doubt Become the Imposter Syndrome?

This website uses cookies to improve your experience while you navigate through the website. Out of these cookies, the cookies that are categorized as necessary are stored on your browser as they are essential for the working of basic functionalities of the website. We also use third-party cookies that help us analyze and understand how you use this website. These cookies will be stored in your browser only with your consent. You also have the option to opt-out of these cookies. But opting out of some of these cookies may have an effect on your browsing experience.
Necessary Always Enabled
Necessary cookies are absolutely essential for the website to function properly. This category only includes cookies that ensures basic functionalities and security features of the website. These cookies do not store any personal information.
Non-necessary
Any cookies that may not be particularly necessary for the website to function and is used specifically to collect user personal data via analytics, ads, other embedded contents are termed as non-necessary cookies. It is mandatory to procure user consent prior to running these cookies on your website.
SAVE & ACCEPT